This 1980 C3 Corvette has had a frame-off restoration that lasted over 3 years and was completed in 2017.  The completion of the restoration coincided with the opening of the Miles Through Time Automotive Museum located in Toccoa, GA. The C3 Vette was driven from the restoration shop where it had been for three years was put on display in the front of the MTT museum. The car has been pulled out of the museum a few times, but has not really been driven on the road since it was driven to the museum. The inside and outside of the car is perfect 10 out of 10.  It sounds fantastic and is one of the best originally looking 1980 Corvettes in existence.  When you sit in the car it actually still smells like a new car, amazing for a almost 40 year old car.

In 1980, both front and rear bumper covers were restyled with brand new integrated aerodynamic spoilers that resulted in a significant reduction in drag and increased radiator air flow. The hood was also restyled as well. The crossed-flag emblems disappeared from the front fenders and were revised to a more elongated style on the nose and fuel door. L-82 emblems moved from the hood to the front fenders on cars ordered with the optional high performance engine. This was the finale for the L-82 Corvette emblem, now producing 230 hp (172 kW) but it could not be mated to a 4-speed, as the manual gearbox was offered only with the L48 engine option. The speedometer in all cars read to a maximum of 85 mph (137 km/h), mandated by a new and controversial federal law. Air conditioning became standard, as did the tilt-telescopic steering column, power windows, exterior sport mirrors, and the convenience group. New was an optional roof panel carrier that would mount to the rear fastback deck. Many weight-saving components were introduced including thinner body panels and an aluminum Dana 44 IRS (Independent Rear Suspension) differential and crossmember. The new lighter unit replaced the arguably stronger cast iron GM 10 bolt IRS differential. In line with further weight savings, the aluminum intake manifold associated with L-82 engines since 1978 was now installed in all cars. For the first time, due to California emission considerations, a unique engine application was installed in cars delivered to that state and was mandatory. This motor was a 305 cu in (5.0 L) V8 engine rated at 180 hp (134 kW), fitted with new tubular stainless steel exhaust manifolds, and mated to an automatic transmission, also mandatory. The carburetor and ignition timing were controlled by Chevrolet’s new Computer Command Control system. The smaller displacement engine was not available in any other state. California buyers were credited $50 as consolation but had to pay for the California emissions certification which was $250. For comparison, the L-48 350 cu in (5.7 L) engine, standard in the other 49 states, was rated at 190 hp (142 kW). The base price increased four times during the model year raising the cost of the car by more than $1,200 to $14,345,24. (via wikipedia)

See the car in person at the Miles Through Time Automotive Museum open Wednesday through Saturday 10 to 3. 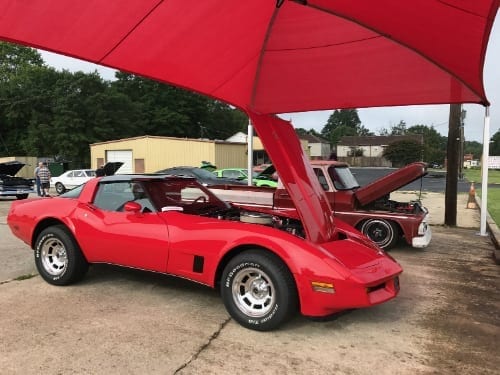 Have you heard of Carhenge? The car version of Stonehedge. Carhenge replicates Stonehenge and consists of the circle of cars, 3 standing trilithons within the circle, the heel stone, slaughter stone, and 2 station stones which includes a “Car Art Preserve” with...
Read More

One of the neatest byproducts of open the Miles Through Time Automotive Museum has been getting the opportunity to meet so many different people. People have come into the museum from all over the world and understanding their automotive perspective is always...
Read More

This 1980 C3 Corvette has had a frame-off restoration that lasted over 3 years and was completed in 2017.  The completion of the restoration coincided with the opening of the Miles Through Time Automotive Museum located in Toccoa, GA. The C3 Vette was driven from the...
Read More

Toccoa Falls and an Automotive Museum

Looking for a nice day trip? Consider visiting Toccoa, GA? Toccoa is only about an hour from the Atlanta metro, the Athens area and about an hour from Greenville, SC.  Even a trip from Charlotte, NC would be an easy day trip and Toccoa sits right at the base of...
Read More

Electric Car Chargers For All When it comes to small towns with electric charging stations, Toccoa, GA may just have the most electric car chargers in relation to population. As of 2016, the population of Toccoa, GA was just over 8,400 people and yet the small city...
Read More

A Span of 110 years on display Come to see over 100 years of automotive history on display in the museum, along with one of the automotive industry's most advanced vehicles, the Tesla Model X. This is a unique opportunity to cruise-in where classics and muscle meet...
Read More

The One Year Anniversary Car Show was a huge success. The show would not have been possible without help from great people and organizations.  Patrick Klug from State Farm was our key sponsor this year and helped make the dash plaques we gave out possible. ...
Read More

We are still available for special events, private events, large groups or by appointment.  We will also be open about once a month throughout the off season for special events.  Sign up for our newsletter and follow us on Facebook to stay up to date.